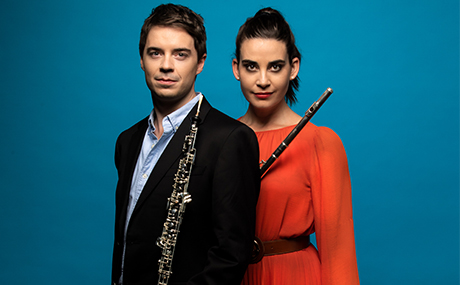 After their prize-winning Mendelssohn symphonies cycle and acclaimed Mozart symphonies album, the NDR Radiophilharmonie and its chief conductor Andrew Manze now present Beethoven’s Fifth and Seventh symphonies. While Beethoven’s Fifth is arguably the most famous symphony in the history of music, the Seventh counts as one of the most rhythmically-advanced pieces of nineteenth-century music; an “apotheosis of dance”, to quote Richard Wagner. Both works display Beethoven’s mastery of and audacious approach to musical form as well as the richness of his melodic invention, and are generally praised as paragons of symphonic composition. Andrew Manze brings his experience in the field of historically informed performance to the polished symphonic sound of the NDR Radiophilharmonie, providing an ambience that fits these early nineteenth-century works like a glove.

This album will be released as 1 CD and in digital formats for streaming and high-resolution downloads. (Article number: PTC 5186814)

The Akademie für Alte Musik Berlin continue their Handel trilogy with this recording of the last six concerti grossi of the composer’s Op. 6. Originally designed as attractive interludes to English oratorio performances, Handel’s concerti grossi soon gained fame as some of the most appealing orchestral music of the baroque era. With these pieces, written in London towards the end of his career, Handel paid tribute to the immensely popular concerti grossi of Corelli while simultaneously proving his mastery, incorporating all musical styles of his times into his work. The players of the Akademie für Alte Musik Berlin, led by their concertmaster Bernhard Forck, demonstrate why many consider them the best baroque ensemble of today. The concerti grossi Op. 6 are concluded with this second instalment, and a recording of the concerti grossi Op. 3 will complete the trilogy.

The ensemble’s first PENTATONE album, Cantata (2018) with countertenor Bejun Mehta, won a Diapason d’or. Their 2019 recording of the first six Op. 6 concerti grossi was hailed as “immaculately played … free of fashionable eccentricities” by The Sunday Times, while Klassik praised the ensemble’s playing as “eloquent”.

This album will be released as 1 Super Audio-CD and in digital formats for streaming and high-resolution downloads. (Article number: PTC 5186738)

Vocal works with a profound humanity

From a deeply stirring Mass to hauntingly re-imagined Leonard Cohen masterpieces, LUNA PEARL WOOLF: Fire and Flood encompasses 25 years of vocal works by composer Luna Pearl Woolf, as performed by the Choir of Trinity Wall Street, cellist Matt Haimovitz, and more, conducted by Julian Wachner. In her penetrating album notes, New York Times contributing writer Corinna Da Fonseca-Wollheim comments, “Luna Pearl Woolf trains a zoom lens on the collective experience, sometimes plunging us right into the midst of destruction and anarchy only to pull back, in one swoop, to a clear-eyed plane of compassion.” These arresting works include her frequently-performed cello-choir concerto, Après moi, le deluge, which emerges from the tragic aftermath of Hurricane Katrina; and the dramatic, low-voiced To the Fire, with its prophetic, Old Testament text. In One to One to One, “three female singers reflect and refract the male gaze in an uproar of vocal virtuosity” (Da Fonseca-Wollheim); while Missa in Fines Orbis Terrae journeys to the ends of the earth in search of revelation, mercy, peace. Finally, two inventive arrangements for three voices and cello create a kaleidoscopic expansion of colors and timbres in Cohen’s ironic Everybody Knows and foreboding Who By Fire. Noted among a new generation of politically conscious and artistically progressive composers, Woolf has been heard widely across North America and in Europe. Her music is praised by The New York Times for its “psychological nuances and emotional depth.”

This album will be released as 1 CD and in digital formats for streaming and high-resolution downloads. (Article number: PTC 5186803)

Portrait of a unique instrumental relationship

Flautist Ana de la Vega teams up with two-time ECHO award-winning oboist Ramón Ortega Quero and the Trondheim Soloists on her second PENTATONE album, to explore the intricate and unique relationship between flute and oboe in concertos by Joseph Haydn and Carl Stamitz. The programme consists of two concertos Haydn originally designed for two lire organizzate, as well as Stamitz’s concerto for flute, oboe and orchestra in G Major. The recording also features the latter’s vibrant and virtuosic but rarely recorded Flute concerto in D Major, which offers some of the finest writing for flute of the entire Classical era.Ana de la Vega expands her PENTATONE discography after her acclaimed debut album with concertos by Mozart and Mysliveček. She works together with Ramón Ortega Quero as well as the Trondheim Soloists, whose album Transfigured Night with Alisa Weilerstein was released on PENTATONE in 2018.

This album will be released as 1 CD and in digital formats for streaming and high-resolution downloads. (Article number: PTC 5186823) 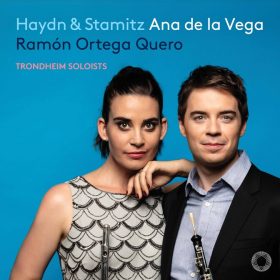 “Both soloists and their accompanists […] play all this undemanding music (for the listener, at least) with ideal pose and balance.”...