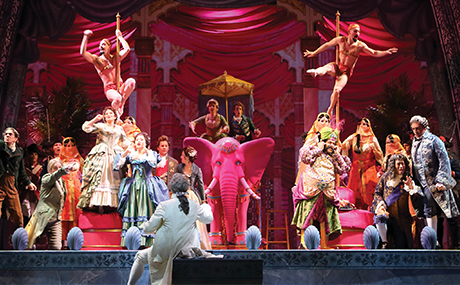 “Much of this comes across on the present recording, in which there is, technically, more than a little to admire. The recorded sound is bright and lively. Balances between voices and orchestra are excellent.”

Corigliano and Hoffman wrote the piece between 1983 and 1991 for New York’s Metropolitan Opera; at the time, it was the first new opera commissioned and premiered at that house in twenty-five years and, today, stands as one of just five new operas James Levine commissioned and conducted at the Met in his four-plus decades leading the institution. Remarkably, the present recording from Pentatone, a quarter-century after Ghosts’ 1991 premiere, marks the first time it’s appeared on disc (a telecast of the original production can be rented or streamed with a subscription on the Met’s website). So the big question is: was this recording worth the wait? And the answer is a perfectly equivocal yes and no.

Listening to Ghosts, it’s best to check expectations that it operates on the same level as The Marriage of Figaro or The Barber of Seville at the door: Hoffman’s libretto runs the gamut from the vulgar to the profound and Corigliano’s score follows closely along, but the former rarely packs the depth, subtlety, wit, irreverence, or charm of Da Ponte or Sterbini. Rather, Ghostsseems to be trying to be all things to all listeners — edgy, nostalgic, farcical, adventuresome — and, in so doing, manages to not be a particularly satisfying drama. Indeed, given the familiarity of many of these characters, there’s surprisingly little emotional payoff at the end. Yes, Beaumarchais and Marie Antoinette drift off into eternity together but so what? Nearly all of the opera’s characters remain largely cardboard cutouts and, even in a fine performance, it can be difficult to feel too much sympathy for any of them.[ Check out this release: ]

In the pit, James Conlon delivers a well-paced, vibrant account of the score. The LA Opera orchestra is certainly at home in the portions of Ghosts that allude back to Classical- and Romantic-era operas, but they really shine in Corigliano’s sinewy Modernist writing, especially in Act 2. Overall, they prove an impressive ensemble: athletic, colorful, versatile.

And it’s these qualities that, ultimately, make this recording burn hotter than cold. Casting- and libretto-warts aside, Corigliano’s music for Ghosts is easily as significant, inventive, and interesting as what’s to be found in Nixon in China, The Voyage, or The Great Gatsby. That it took too long to get this piece on disc is a shame — but at least now it’s documented and widely available. And, for that, many thanks are due Pentatone and LA Opera.