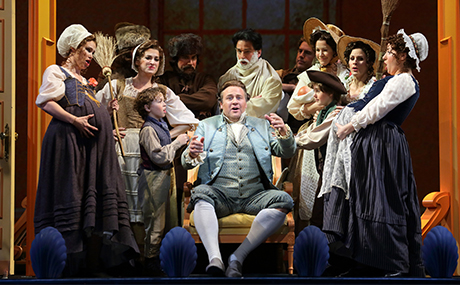 “Corigliano is at his most inspired in lively, spirited music, whether it’s the swift strings depicting Figaro running from his debtors or the energetic rhythms of Samira’s cabaletta.”

In 1991, the Metropolitan Opera gave a lavish production of a new commission many years in the making: John Corigliano’s The Ghosts of Versailles with a libretto by William M. Hoffman. At the time, I was a teen who had recently caught the opera bug and had seen my first live opera only the year before.

In the intervening 25 years, I’ve only known the opera by name, never having heard a note. So, when La Cieca asked me to write a review of the new audio recording, taken from live performances at L.A. Opera, I said that I’d only be able to approach it from a fresh, newcomer’s perspective. And that, my friends, is what I offer you today.

First, the story. Louis XVI, Marie-Antoinette, and a slew of their members of court are hanging out in the afterlife, bored with their existence. Enter the playwright Pierre Beaumarchais, who is in love with the queen, and who has hatched a plan to bring her back to life.

He will write a new opera (for sake of ease, Beaumarchais is an all-purpose “creator” so his plays are referred to as operas and Mozart and Rossini are not mentioned) called A Figaro for Antonia. Through this opera, he will change the course of history and the French queen will be saved and somehow brought back to life.

The plot of his new opera is essentially that of the third instalment of his Figarotrilogy, La Mère Coupable. The aristocrats of Louis XVI’s court are all bored and thus, happy to enjoy a new creation by Beaumarchais. Marie-Antoinette, on the other hand, receives the notion more seriously and takes the opportunity to relive her harrowing end in a rather large aria (“They are always with me”).

And so, the opera-within-an-opera begins, with Beaumarchais evoking different scenes on stage of the Versailles Opera House (which was built do celebrate the wedding of the unfortunate king and queen). The opera brings back all of our favourites—Almaviva, Rosina, Figaro and Susanna. Cherubino, now dead, makes an appearance in a flash-back in the opera-within-the opera.

There is also the villain Bégearss, an homage to Moliere’s Tartuffe, who has been promised the hand of Almaviva’s daughter, Florestine, the result of an out-of-wedlock tryst. But she’s in love with Léon, who is the son of Rosina’s love-child with Cherubino. In the course of the opera, they go through a series of zany events involving the sale of Marie-Antoinette’s necklace.

The plot, as Louis XVI remarks, is more complicated than the final act of Marriage of Figaro. But the premise is certainly interesting, even fascinating, so long as one doesn’t get too mired in the details.[ Check out this release: ]

What I admire most about the work is Corigliano’s skill as an opera composer. Whereas so many contemporary composers in recent times have offered over-orchestrated instrumental writing and half-baked vocal writing, Corigliano is at home writing for both orchestra and voice. He responds to a multitude of dramatic situations with a rich variety of music and stays on top of the some two dozen characters.

The orchestration brings the story ebulliently to life without veering into self-indulgence. Corigliano is at his most inspired in lively, spirited music, whether it’s the swift strings depicting Figaro running from his debtors or the energetic rhythms of Samira’s cabaletta. While he does a good job of depicting the weary, drowsy atmosphere of the ghosts’ existence, the prominent use of Theremin is a serious misfire (Oooh! Ghosts!!)

Despite the many solo players in the opera, much rests on the shoulders of the soprano portraying Marie Antoinette. She is more than the lead role; she is crucial to the work’s dramatic success.