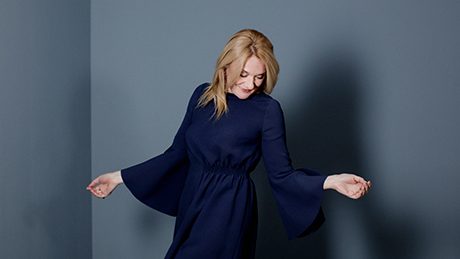 AN EVENING OF INTIMATE SONGS AMONG FRIENDS

Soirée captures the atmosphere of informal, domestic music making. Czech star mezzo-soprano Magdalena Kožená offers an intimate and highly personal collection of international songs together with an outstanding group of musical friends, including Sir Simon Rattle, who makes his recording debut as a pianist. The German lied is represented by Brahms (Two Songs, Op. 91 and Five Ophelia Songs, WoO 22) and Strauss (Morgen!), the French chanson by Chausson (Chanson perpétuelle) and Ravel (Chansons madécasses), and 20th-century avant-gardism with Stravinsky’s Three Songs from William Shakespeare. In between these explorations, Kožená revisits her musical roots with a selection of Dvořák songs, arranged by Duncan Ward, as well as Janáček’s Nursery Rhymes.  Soirée is the second release of Magdalena Kožená’s exclusive collaboration with PENTATONE, after having presented the baroque cantatas recital album Il giardino dei sospiri in 2019.

This album will be released as 1 Super Audio-CD and in digital formats for streaming and high-resolution downloads. (Article number: PTC 5186671)

Swiss pianist Francesco Piemontesi interprets Schubert’s last three piano sonatas (D958-D960) on his PENTATONE debut album, after years of engagement with these extraordinary works. These sonatas continue to fascinate pianists and listeners until this very day. They are arguably among the most existential music ever written for the piano, full of beauty and sadness, celebrating life and at the same time anticipating the composer’s untimely death. Even if Schubert was barely thirty years old when he wrote these works, they reveal the otherworldly and detached nature of what is often described as “late style”, while the music remains highly expressive and personal.

This album will be released as 2 CDs and in digital formats for streaming and high-resolution downloads. (Article number: PTC 5186742)

MASTERWORKS WITH A NEW SPARKLE

Old Souls presents masterworks of Beethoven, Dvořák, Wolf and Kreisler in new arrangements for flute and strings, played by a group of outstanding young musicians. Guy Braunstein’s arrangements display these well-known pieces in a fresh new light, while simultaneously expanding the flute repertoire and showcasing the exceptional possibilities of the instrument, here played by Gili Schwarzman. Braunstein and Schwarzman are joined by violinist Susanna Yoko Henkel, violist Amihai Grosz and cellist Alisa Weilerstein. While the arrangement of Beethoven’s Violin Sonata Op. 23 entails a thorough recomposition of the original, the performances of Dvořák’s “American” String Quartet, Wolf’s “Italian” Serenade and Kreisler’s Syncopation stay closer to the source, with the flute taking up the role originally played by the first violin. The use of the flute creates novel sonic sensations through the way it blends with the strings, and at times gives the pieces a sparkle they did not have before.

This album will be released as 1 CD and in digital formats for streaming and high-resolution downloads. (Article number: PTC 5186815) 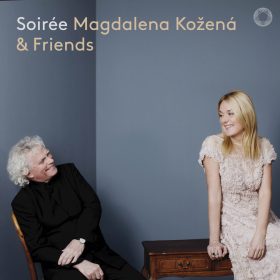 “This excellent Soirée can be warmly recommended.” “Soirée” starring Magdalena Kozena with her outstanding group of...

Kožená and Rattle on the Financial Times

“There is some highly rewarding music here which does not come round often in the recital hall.” The Financial Times features “Soirée”...