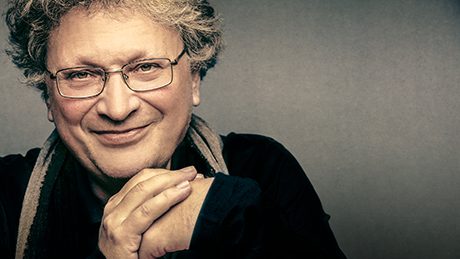 PENTATONE is delighted to announce the launch of a complete cycle of Schubert symphonies with star conductor René Jacobs and the dynamic Belgian period instrument ensemble B’Rock. This ambitious new project marks René Jacobs’ and B’Rock’s first collaboration with Pentatone, and is expected to conclude in 2021.

Recorded earlier this year against the idyllic backdrop of the Tyrolean Alps at Innsbruck, the first instalment of the cycle (Symphonies Nos. 1 & 6) will be released in October. Adding to an abundant discography built over the last four decades, this is René Jacobs’ first-ever Schubert recording.

“René Jacobs is simply one of the most luminous musical minds of our time, a thinking-man’s conductor in the noblest sense of the word, whose interpretations lend renewed perspective and depth to masterpieces we think we know all too well. As he now turns his attention to the sound world of Franz Schubert, we are honoured to partner with him and B’Rock on what promises to be a fascinating journey.”

MELANCHOLIA BEHIND A CARNIVAL MASK

On his first album released on PENTATONE, multiple prize-winning conductor René Jacobs finally records Schubert, his first great musical love. Jacobs delivers his fresh perspective on the favourite composer of his youth together with the exceptional players of the B’Rock Orchestra, acclaimed for their inspired playing, musical curiosity and original approach to the classics.

The album contains Schubert’s First and Sixth symphonies, written when he was still a teenager. With this recording, Jacobs and the B’Rock Orchestra lift out the maturity and depth of these two early works. Whereas the First has a more classical, bubbly quality, the Sixth shows Schubert’s inclination to musical Romanticism. At the same time, these symphonies have much in common: both display humour and joie de vivre, with “carnivalesque” allusions to early nineteenth-century Italian opera, but behind the happy façade lies a deeper layer, full of melancholy and bitterness. In that respect, these works fully capture Schubert’s personal life: that of a social, lively man, plagued by the knowledge of his fatal illness. They are performed on period instruments, transparent, but full of fire.

This album will be released as 1 Super Audio -CD and in digital formats for streaming and high resolution downloads. (Article number: PTC 5186707)

With more than 260 recordings to his credit and an intensive career as singer, conductor, scholar and teacher, René Jacobs has achieved an eminent position in the field of Baroque and Classical vocal music. He received his early musical education as a choirboy in the cathedral of his native city of Ghent, and remained active as a singer during his university studies in Classical Philology. His encounters with Alfred Deller, Gustav Leonhardt and the Kuijken brothers were to determine his orientation towards Baroque music and specialization as countertenor, in which he very soon established his reputation as one of the most prominent singers of his time. In 1977 he founded the ensemble Concerto Vocale, exploring 17th century vocal chamber music and operatic repertoire and made a serie of impressive recordings, many of them international award winning and “World premieres.” René Jacobs made his debut as an opera conductor in 1983 with a production of Antonio Cesti’s Orontea at the Innsbrucker Festwochen, where later he held the position of artistic director from 1996 to 2009. His long and successful collaborations with the Berlin Staatsoper Unter den Linden since 1992, Theater an der Wien (Vienna) since 2006, the Théâtre Royal de la Monnaie (Brussels), the Salzburger Festspiele, Festival of Aix-en-Provence and other leading international stages in Europe, USA and Asia, conducting from early baroque to Rossini and from the most unknown to the most famous titles. His work as a conductor is distinctive for its pioneering spirit and his profound studies of historical sources have often resulted in fresh and daring interpretations of the standard opera repertoire. Examples of such are his internationally acclaimed Mozart operas recordings, remarkable for their unique fusion of scholarship and musical instinct. His Nozze di Figaro was rewarded by a Grammy as best opera and the Gramophone magazine (UK) has quoted in an article: “René Jacobs’s Mozart opera series are one of the recorded marvels of our time”. Alongside his extensive operatic activity, performing sacred music and oratorio has always been a very important part of Jacobs’ career. Elected Doctor Honoris Causa at the University of Ghent, René Jacobs has received many of the most prominent prizes from international critics for his recordings and for his musical career achievements.

This album will be released as 1 Super Audio -CD and in digital formats for streaming and high resolution downloads. (Article number: PTC 5186707)

The musicians of B’Rock Orchestra set out to inspire each other, and to realise their ideas by inviting leading soloists, conductors, directors, artists and thinkers. They apply their intuitive, inquisitive and impact-driven approach to a wide variety of projects. The masterpieces and new finds originate from at least four centuries of music, and the instruments are adapted to the period.

For the Connoisseur and the Curious

B’Rock Orchestra is all about bringing the purest musical experiences to the broadest possible audience. By presenting a refreshing context, B’Rock strives for a better understanding of the music – baroque, classical or otherwise.

The specific sound of B’Rock Orchestra is said to ‘ooze theatre and colour’. B’Rock often initiates hand-crafted projects of ‘orchestral theatre’, sparking a vibrant dialogue between music and other art forms. The orchestra also commissions new works or collaborates with thought-provoking figures in the musical and theatrical worlds.

B’Rock Orchestra is proud to count musicians such as René Jacobs, Ivor Bolton and Alexander Melnikov as members of their artistic family. As of 2018, the Russian violinist Dmitry Sinkovsky is  ‘Artist in Residence’. The orchestra itself is ‘Artist Associate’ at deSingel Arts Campus in Antwerp. B’Rock Orchestra has been welcomed on prestigious stages worldwide, including the Concertgebouw in Amsterdam, the Philharmonie de Paris, Bozar in Brussels, the Kölner Philharmonie, L’Auditori in Barcelona, Theater an der Wien, the BBC Proms, Opéra de Normandie, the Holland Festival, Wiener Festwochen, Ruhrtriennale, Klarafestival, La Monnaie, Concertgebouw Brugge and the Mozartwoche in Salzburg. Recent tours have taken the orchestra to the Hong Kong Arts Festival and the National Center for Performing Arts in Beijing. Future tours will include Japan, China and the USA. 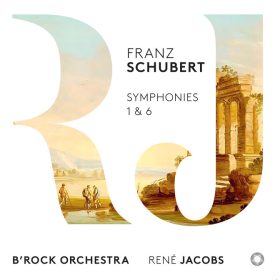 Only in the past half century have Schubert’s early symphonies enjoyed the “canonical” treatment accorded to Beethoven’s nine, but did any teenager —...

Schubert’s Symphonies 1 & 6 is a vigorous, original and highly inspired performance!

“A vigorous, original and highly inspired performance!“ The Wholenote praises our release of ‘Schubert – Symphonies 1 &...