"There art thou happy"

The last time I visited the German classical violinist Arabella Steinbacher, she was doing the Bruch Violin Concerto for PentaTone. Now she's back with the last three of Mozart's five violin concertos, this time accompanied by Daniel Dodds and the Festival Strings Lucerne. For those of you not acquainted with Ms. Steinbacher, she has won several important international violin prizes, she has recorded over half a dozen albums, and she was a recipient of an Anne-Sophie Mutter Foundation scholarship.

Ms. Steinbacher tells us in a booklet note that "It was finally time for Mozart. These concertos have been with me since early childhood, forming an important leitmotiv throughout my career. Since I associate many memories with them, I feel they are very close to my heart." Fair enough. But understand she is up against formidable competition in these pieces, particularly from Anne-Sophie Mutter (DG), Lara St. John (Ancalagon), David Oistrakh (EMI), and Arthur Grumiaux (Philips), among many others. Still, if one is looking for an especially warmhearted, elegant, and graceful account of these concertos, done up in quite good SACD sound, Ms. Steinbacher neatly fills the bill.

There are some pluses to the album right off the bat. First, Ms. Steinbacher provides three of the violin concertos on the program whereas most other discs offer but two. As Shakespeare's Friar Laurence would say, "There art thou happy." Second, Ms. Steinbacher performs with the Festival Strings Lucerne, one of Europe's finest chamber orchestras, lean enough in size to offer a zesty and fairly transparent accompaniment. "There art thou happy." And third, PENTATONE's engineers deliver the sound in both stereo and multichannel, depending on your playback equipment and your personal preference. "There are thou happy."

But most of all, I think people will be happiest with Ms. Steinbacher's performances, which are perhaps not as passionate as some but certainly as heartfelt. She begins the program with the Violin Concerto No. 3 in G major, K. 216, which Mozart wrote along with all five of his violin concertos in Salzburg in 1775 when he was only nineteen years old. Mozart was more of a piano guy, so he didn't take the violin concerto very far before he died. Nevertheless, because he died relatively young, who knows what he may have done with the genre had he lived another thirty or forty years. In any case, No. 3 is fairly typical of the form, with an Allegro, an Adagio, and a closing Rondeau Allegro. It is not particularly adventurous, but it is Mozart, which means it's always charming.

Ms. Steinbacher's way with the Third Concerto is very much in the manner of Anne-Sophie Mutter's famous recording with Herbert von Karajan and the Berlin Philharmonic. This is no surprise, I suppose, given Ms. Steinbacher's past association with Ms. Mutter's Foundation. In any case, her playing is lively and attentive but sweetly flowing as well, with a nice balance in the outer movements between being too fast and furious and too slow and sentimental. In the quiet Adagio her violin tone is wonderfully lyrical and singing, reminding us of the work's strong connections to the theater.

Next up, we find the Violin Concerto No. 4 in D major, K. 218. Despite its similarity in classical structure to the Third, the Fourth Concerto is a bit more romantic and sinuous than the Third. The Fourth may also be more familiar than the Third to some listeners, which means listeners may have more predetermined conceptions about it. Whatever, Ms. Steinbacher's violin tone is always sparkling, the rhythms resilient and alive, the slow movements heavenly. She handles the closing movement of No. 4 in a particularly delightful manner, making it one of the lightest, most sprightly you'll find. 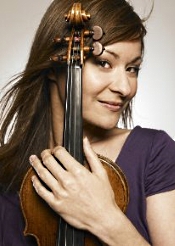 Finally, we get the Violin Concerto No. 5 in A major, K. 219, sometimes called the "Turkish" concerto. Mozart claimed No. 5 his personal favorite. According to the composer's wishes, Ms. Steinbacher alternates an energetic mood with a dreamier, more gentle atmosphere. People of Mozart's day tended to think of the concluding Rondeau as being in a "Turkish" style, but if anything it sounds more Gypsy-like, and Ms. Steinbacher plays it that way.

Ms. Steinbacher's performances will not disappoint her fans nor fans of Mozart in general. And the jewel case comes packaged in a light-cardboard slipcover.

One of the first things that strikes the listener about the sound is the room ambience, a light but pleasant resonant bloom that sets off the sound of the relatively small ensemble. It provides a golden glow to the occasion that is quite fetching. Otherwise, the sound is somewhat close and big, warm, ultrasmooth, a little lacking in overall depth but wide across the stage and easy on the ear. The violin placement puts the soloist front and center but not too much so, and the instrument feels well integrated into the rest of the ensemble without making it the absolute center of attention.