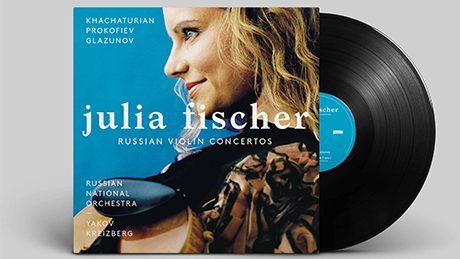 “The most immediately striking aspect of Julia Fischer’s playing, technically speaking, is its immaculate finish. Her mastery is beyond question, her ability to trace a smooth even line is a source of pleasure itself”.Gramophone  This remarkable album marks the recording debut of German violinist Julia Fischer as well as the beginning of her extraordinary partnership with Russian-born conductor Yakov Kreizberg, which would result in numerous PENTATONE releases before the conductor’s untimely death in 2011. Together they tackle three Russian violin concertos which have been tragically overlooked, shedding new light on these masterpieces.The maturity of the repertoire selection and delightful interplay between soloist, conductor and orchestra all contribute to a truly stunning debut album. The violin concertos of Khachaturian, Prokofiev and Glazunov are preserved in timeless beauty, providing a testament to the masterful artistry of Yakov Kreizberg, the Russian National Orchestra and a very precocious Julia Fischer. The multiple prize-winning album is released here for the first time in a highly collectible LP version.

“The Khachaturian had always been a dream piece of mine; ever since I first heard the music, I wanted to play it. I first heard the concerto as an 11-year-old, when a girlfriend played it with a student orchestra during a class. The themes immediately resounded from every direction, they were played, sung and “danced” without interruption and the rhythmic motif, which can be heard throughout the entire first movement and is first played on the solo violin, thus becomes a kind of signal to all participants. At the time, I noticed straight away how impressive this work could be, and since then I have striven to establish it as part of the standard violin repertoire. From the point of view of the violinist, it is a highly rewarding work, and the ensemble-playing with the orchestra is original and delightful. Above all, though, the origins of the composer – his native Armenia – are clearly audible in this concerto.”Julia Fischer, 20 years old, in 2004  ABOUT JULIA FISCHER

Julia Fischer is one of the world’s leading violinists. Not only does she express her artistic versatility as a violinist, but also as a pianist and chamber-musician. She was born of German-Slovak parents in Munich in 1983, receiving her first piano lessons at just four years old from her mother, Viera Fischer. At the age of nine, she was accepted by the renowned violin professor, Ana Chumachenko, as a preparatory student at the University of Music and Performing Arts in Munich. In 2011, she succeeded her teacher in this position.

Concert highlights in recent years have included engagements with the Vienna Philharmonic, the Berlin Philharmonic, the Leipzig Gewandhaus, the Zurich Tonhalle Orchestra, the BBC Philharmonic,the St. Petersburg Philharmonic, the Cleveland Orchestra, and the San Francisco Symphony Orchestra. Eminent conductors with whom she has performed include Herbert Blomstedt, Christoph Eschenbach, Vladimir Jurowski, Paavo Järvi, Lorin Maazel, Sir Neville Marriner, Sir Simon Rattle, Esa-Pekka Salonen, Yuri Temirkanov, Franz Welser-Möst, and David Zinman.  In 2011, Julia Fischer founded her own quartet, which consists further of violinist Alexander Sitkovetsky, violist Nils Mönkemeyer, and cellist Benjamin Nyffenegger. In addition, she regularly performs in duo with cellist Daniel Müller-Schott. Julia Fischer is also an excellent pianist. In 2008, she gave a concert at the Alte Oper Frankfurt, in which she was featured as soloist in Grieg’s piano concerto as well as in a violin concerto by Saint-Saëns. Since then, she has continued to play the piano in various chamber-music projects. Prestigious awards she has won include: the Gramophone “Artist of the Year Award,” the MIDEM Classical Award, inclusion in the “Jahrhundert-Geiger-CD-Edition” (= violinist of the century CD edition) of the Süddeutsche Zeitung, and the Deutscher Kulturpreis (= German Cultural Award), to mention but a few…

Julia Fischer plays on a violin by Giovanni Battista Guadagnini (1742), as well as on a contemporary Philipp Augustin violin (2011). In this recording, Julia plays the “Booth” Stradivari (1716).

ABOUT THE RUSSIAN NATIONAL ORCHESTRA

The Russian National Orchestra was founded in 1990 by pianist and conductor Mikhail Pletnev and today is widely recognized as one of the world’s top orchestras. The first Russian orchestra to perform at the Vatican and Israel, the RNO maintains an active international tour schedule, appearing throughout Europe, Asia and the Americas. The RNO is a frequent visitor to major festivals such as Edinburgh, Shanghai and the BBC Proms, and is the founding orchestra of the Festival Napa Valley, held every summer in California.

The RNO has made many recordings for PENTATONE, including a recording of Prokofiev’s Peter and the Wolf and Beintus’s Wolf Tracks. Conducted by Kent Nagano and narrated by Sophia Loren and Bill Clinton, the album received a 2004 Grammy Award, making the RNO the first Russian orchestra to win the recording industry’s highest honor.

The orchestra’s Shostakovich cycle on PENTATONE is widely acclaimed as “the most exciting cycle of the Shostakovich symphonies to be put down on disc, and easily the best recorded.” (SACD.net) The 2015 release of Symphony No. 7 under the baton of Paavo Järvi won the Diapason d’Or de l’année 2015, the Music Web Recording of the Year 2015, and was nominated for a 2016 Grammy Award for Best Surround Sound recording.

The orchestra maintains a full Moscow season and has established the annual Grand Festival, which opens the Russian capital’s cultural season each September. Unique among the principal Russian ensembles, the RNO is a private institution funded with the support of individuals, corporations and foundations throughout the world. In recognition of its artistry and path-breaking structure, the RNO was the first nongovernmental orchestra to receive grant support from the Russian Federation.

The Russian conductor Yakov Kreizberg built an impressive career both on the opera podium and in the concert hall. He is renowned for his attention to intricate detail and emotional and passionate expressiveness. Born in Leningrad, he emigrated to the USA in the mid-1970s where he studied at Mannes College and took up conducting fellowships at Tanglewood, studying with Bernstein and Ozawa. Early on in his career, he was appointed General Music Director (GMD) of the United Municipal Theaters of Krefeld and Monchengladbach and later the Komische Oper, Berlin, conducting both opera productions and orchestral concerts. He stated: “Working in opera is the single best experience a conductor can get. Without it, he will never develop into what he could be. Singers, good and bad, teach you to be more flexible and to learn things a symphony orchestra will never teach you.”

He made his UK début conducting the BBC Symphony Orchestra at The Proms in 1993. Other British appointments included the principal conductor of the Bournemouth Symphony Orchestra and the Glyndebourne Festival Opera. Kreizberg conducted the New York Philharmonic, and he also conducted the Philadelphia, Boston Symphony, Chicago Symphony and Los Angeles Philharmonic orchestras, but never succeeded in securing the music directorship in the US that his supporters felt he deserved.

Kreizberg was Chief Conductor and Artistic Advisor of the Netherlands Philharmonic Orchestra and the Netherlands Chamber Orchestra between 2003 and 2011, during which time he recorded regularly for PENTATONE. These include several impressive violin concerto recordings of Tchaikovsky, Brahms, Mozart, Khachaturian and Prokofiev violin concertos with the violinist Julia Fischer. Kreizberg and Fischer worked together regularly, and Fischer recalled her first meeting with Kreizberg in Philadelphia, where both artists were performing the violin concerto by Aram Khachaturian for the first time, following her arrival after a physically exhausting journey: “So I had the violin in my hand for nearly two days, without sleep, from the car to the stage – I was really at my physical limit. We met in front of the orchestra: ‘Hey, I’m Yakov.’ ‘I’m Julia.’… already we had to start. And it was as if we had already performed together a hundred times. We interpreted it exactly the same way.” 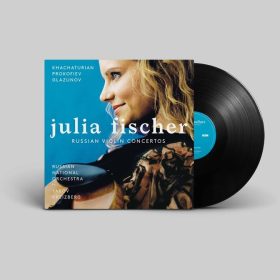