“Moser offers a performance that combines sensitivity, agility and brilliance, while Manze and the Suisse Romande Orchestra are consistently on the ball.“

We are proud to share with you that our recording of Elgar/ Tchaikovsky performed by Johannes Moser , Orchestre de la Suisse Romande and Andrew Manze is Gramophone Editor’s Choice for May 2017! This release displays profoundly moving, elegiac lyricism of Elgar and the wistful charm and brilliance of Tchaikovsky. Read a glimpse of the review below.

A most unusual account of the Elgar Concerto, one that’s both musically gripping and recorded at relatively close quarters. The first minutes command immediate attention, Johannes Moser’s handling of the opening chords confident and tonally full-bodied, the ascending solo scales that lead to the principal melody haltingly tiered, the melody itself tenderness personified, slowing subtly before the strings take the lead and Moser rises boldly to the crest of the phrase. The full orchestra’s response is both heroic and uplifting. The second subject finds Moser and the desks of the Suisse Romande playing into each other’s hands, with flexibility to spare (more so than on the majority of Moser’s rivals), the main body of the Allegro molto second movement, taken very briskly, pure quicksilver, again with keen inter-instrumental dialogue much in evidence. The Adagio positively aches, Moser achieving his affect by varying vibrato from an intense, pulsing glow to a cooler, tremor-free line. The finale is extremely dramatic, whether in the heavily weighted fugato-style music from 4’39” (great brass here) or the melancholic episodes at the heart of the movement (starting from around 6’21”), where Moser, although playing from the heart, never sentimentalises the music, and Manze is obviously of a like mind. The rapt return of the Adagio (9’12”) and the defiant restatement of the concerto’s opening chords that follow will likely take your breath away.

Read the full review on Gramophone – May 2017 issue 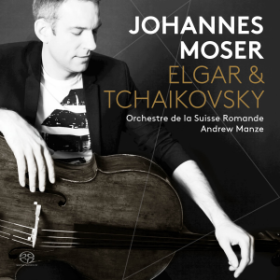 Elgar and Tchaikovsky both look back to a brighter past: Johannes Moser talks about his new release

One of our upcomg releases in february is the “Elgar & Tchaikovsky” performed by the talented cellist, Johannes Moser together with Orchestre...

The cello concerti by Lutosławski and Dutilleux are among the most impactful, prominent and precious pieces of the second half of the 20th century, and both...

For the release of their album Rachmaninov / Prokofiev – Works for Cello and Piano, cellist Johannes Moser and pianist Andrei Korobeinikov have shared...