Pentatone releases Big House with the Ruisi Quartet in February 2023.

The Ruisi Quartet makes its recording debut on Pentatone with Big House, bringing together music by Matthew Locke, Joseph Haydn and Oliver Leith. Spanning nearly four centuries, this combination of composers establishes a harmonious as well as dissonant relationship between past, present and future.

Celebrated for their deeply engaging performances of early repertoire alongside championing progressive new music, the critically-acclaimed Ruisi Quartet has established an international reputation as a charismatic and expressive young ensemble.

There isn’t a punchline but it’s quite funny to think about.

There are no clever connections between this unlikely trio, and hearing their music sit side by side magnifies the centuries that separate them. But if they represent different musical planets, there is a sense they orbit around the same familiar yet subversive centre; Haydn making and breaking all the rules, Oliver organising sounds as sweet and heartbreaking as a Classical slow movement but slippy and smudged around the edges. A 17th Century Fantasia turning in unexpected directions on a familiar route, connecting the harmonious and dissonant relationship between past, present and future.

It feels as though Haydn’s music is the foundation upon which our quartet is built. His writing is instantly engaging, dramatic and vividly characterised; a movement of Haydn can feel like a riddle to be solved, something to be interacted with. In performance his works provide us with opportunities to explore, to be spontaneous, and to connect — with the music, with the audience and with one another. That same spirit of exploration and invention was vital when approaching our new commission from Oliver Leith. Although Oliver is a composer we have nurtured a close relationship with over the last few years, we had little idea where the piece would take us when we began work on The Big House. The journey through new techniques, colourful and cryptic performance directions and unusual tunings pushed us in new ways. Yet, his light touch with written directives gave us freedom to experiment and space for individuality — reminiscent of our approach with Haydn and Locke.

Recording a debut album as a string quartet can feel like a big deal, but it’s also just a snapshot of a moment in time. We feel like there isn’t a well defined sense of our musical present, but rather a melting pot of almost limitless diversity in compositional style and cultural influence. Our intention is to distil a small and very personal part of this chaos onto the record.“ 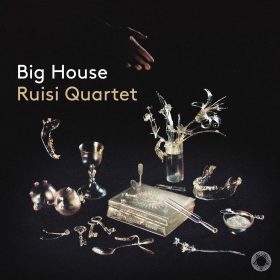 Big House
Buy now
We would like to use our own and third party cookies and similar technologies for statistics and marketing purposes. You can set your preferences by selecting the options below. Withdraw your consent at any time via the shield icon.
Cookie SettingsAccept All
Manage consent