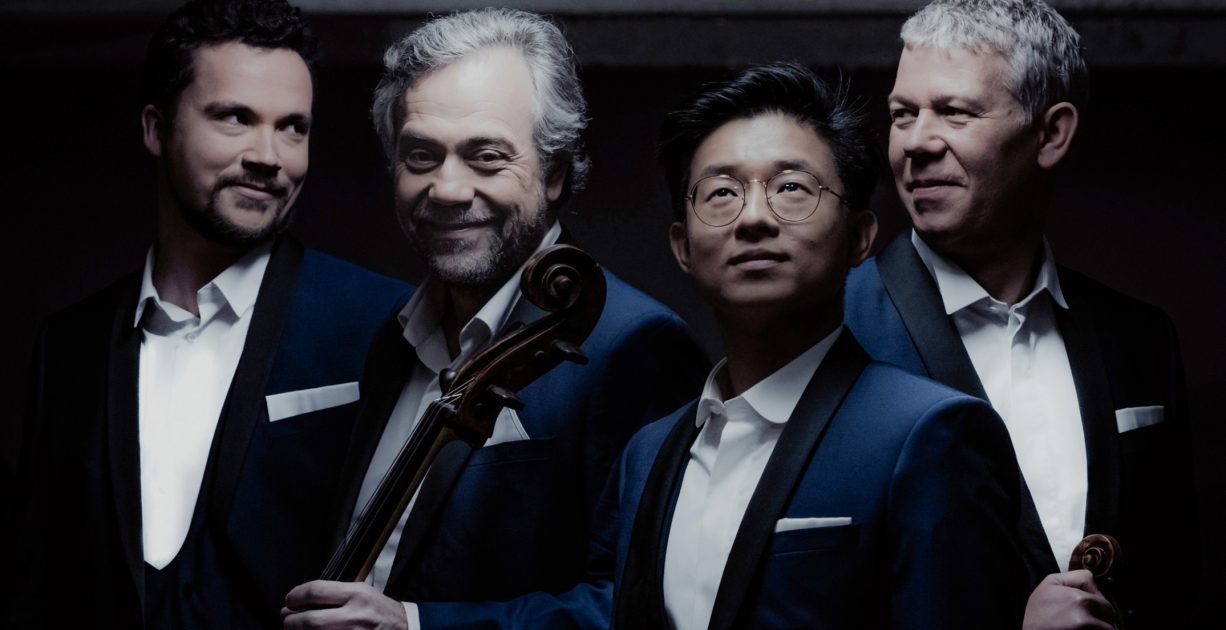 Quatuor Diotima makes its Pentatone debut with a recording of Györgi Ligeti’s string quartets. While the second quartet from 1968 is an avant-garde classic, the first from 1953-54, “Metamorphoses nocturnes”, is often nicknamed Bartók’s seventh quartet, pointing out the continuity between these two Hungarian master composers. Despite moments of nostalgia, it already possesses the ferocious, adventurous nature of the later quartet. In-between these two iconoclast works, the Andante and Allegretto from 1950 offers an intimate moment of repose. The members of Diotima long postponed recording Ligeti’s string quartets, intimidated by their music-historical significance and the demands they place on the players, but now the time has come to pursue this fascinating project and share it with the world.

“For many years we had to postpone recording the Ligeti quartets, terrified as we probably were by the weight of the task at hand. It’s wasn’t just the technical or the instrumental challenges which kept us away, however formidable they may be, but it was mostly a fear of risk, facing music that’s on the edge of utopia.

It was of course the second quartet which accompanied us first, this work being one of the foundational masterpieces of the aesthetics of the 20th century, and of our quartet, having perceived immediately its fierce acquaintance with silence, the terseness of its inflamed expression, and the secret flow of its architecture. Five movements form this quartet – or rather, five essays on movement, each articulated following a logic of contrast and opposition worthy of a vivid dream. And yet, in a way, water permeates through every texture: Ligeti founds, then melts, smelts, his own art, its own rules, takes leave, erases all references to folk music, and last but not least makes iridescent each instrumental entrance by a sort of… law of contagion: anything emitted by an instrument is transmitted, affecting and infecting the other three, reaching inevitably all four voices: from this point on, absolute dizziness, no marks nor borders, a sense of stormy similitude, the intuition of a nearly deaf and unwitting twinning and bond between the instruments.

How many works have been composed under the spell of this masterpiece? How many of us performers and composers were in shock at this great unfolding of the alphabet of the future?

Then came the first quartet. Another unavoidable masterpiece, though often referred to, as a “mot d’esprit”, as the 7th quartet by Bartók. Of course, Ligeti’s great musical fellow countryman is ever present in these pages, through the use of folk music principles – but here the instruments shock and electrify each other, through a kinesis made out of ruptures, reaching from the burlesque to the traumatic. Performing this quartet requires a feverishness that’s often impressive even to us, a risk taking, in order to follow and provoke these “nocturnal metamorphoses”, not only invoking Bartók but also the vertiginous drawings of a Mauritz Escher, created from an invisibly simple series of patterns. This music feels like metal, with its gleam, its thickness, its secret style. It was this recording project which brought us to being acquainted with the Andante and Allegretto, a work from his student years bearing a sleek melancholy, a dredged up sense of grace. The few “forte” moments stem out of a taste for folk music with which he had affinity then. The academic format one may find here is relieved of its duty in the first quartet, composed three years later in 1953.

It was time for us to dive, for, as Ligeti said after getting the Polar Music Prize: “it’s like you’re entering a river. And the river is very fast flowing. And then you let… you… go with the river. And this was my whole life with music.”