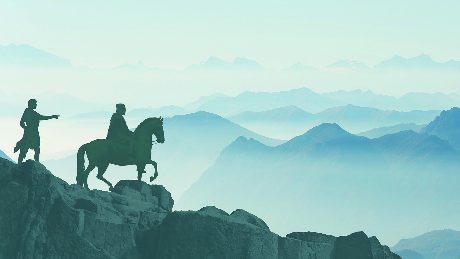 In September, PENTATONE releases four enthralling additions to their catalogue: Strauss – Burleske/ Ein Heldenleben with the Netherlands Philharmonic Orchestra, Denis Kozhukhin and  Marc Albrecht; Aspects of America with The Oregon Symphony, conducted by Carlos Kalmar; Ricky Ian Gordon – The House without a Christmas Tree with Houston Grand Opera, under the baton of Bradley Moore; and Strauss/ Debussy/ Ligeti with the Orchestre de la Suisse Romande and their new music and artistic director Jonathan Nott.

While starting his career adhering to Brahms’ “absolute” or “formalist” compositional approach, Richard Strauss rapidly turned into a staunch supporter of Wagner’s Zukunftsmusik, writing a series of iconoclast symphonic poems full of metaphysical allusions. This album features both sides of Strauss’s musical persona with the Burleske in D minor as well as Ein Heldenleben. While the former is a playful, miniature quasi concerto for piano and orchestra, the latter epitomises Strauss’s symphonic style: majestic, virtuosically orchestrated, full of grand ideas, but never without irony. In that respect, Ein Heldenleben has more in common with Burleske than one would expect. Strauss’ arguably satirical self-identification with the hero of his symphonic poem is underlined by recurrent self-quotations from previous compositions

The central role of the solo violin makes it another solo concerto in disguise, albeit less overtly than Burleske.

These two remarkable pieces are performed by the Netherlands Philharmonic Orchestra and their chief conductor Marc Albrecht, with Denis Kozhukhin delivering the solo piano part in Burleske. All have an impressive track record at PENTATONE. Albrecht and the Netherlands Philharmonic Orchestra have released acclaimed albums such as Mahler Song Cycles with Alice Coote (2017) and Mahler’s Symphony No. 4 with Elizabeth Watts (2015). Kozhukhin has recorded piano concertos by Ravel and Gershwin (2018) as well as Tchaikovsky and Grieg (2016), and has been extensively praised for his Brahms Ballads & Fantasies solo album (2017).

This album will be released as 1 Super Audio -CD and in digital formats for streaming and high resolution downloads. (Article number: PTC 5186617)

A PANORAMA OF CONTEMPORARY AMERICAN MUSIC

Centerpiece of this album is Portland-based composer Kenji Bunch’s Aspects of an Elephant, inspired by the timeless parable of six men who try to discern the traits of an elephant in a pitchdark room, eventually discovering that only the sum of their perceptions encompasses the full truth. In a similar way, the pieces featured on this album constitute a rich panorama of the dynamism and diversity of contemporary American composition.

Bunch’s piece is dedicated to the members of the Oregon Symphony, who release their fifth album with PENTATONE, after Music for a Time of War (2011), This England (2012), Spirit of the American Range (2015) and Haydn Symphonies 53, 64 & 96 (2017). On Aspects of America, they again play under the spirited leadership of music director Carlos Kalmar.

This album will be released as 1 Super Audio -CD and in digital formats for streaming and high resolution downloads. (Article number: PTC 5186727)

A CHRISTMAS TALE OF HOPE AND TRANSFORMATION

Precocious Addie Mills is smart and energetic, just like the mother she never knew. Addie has no idea why her father resents the holidays so intensely, refusing even to allow a Christmas tree in the house. But when she brings home a tree she won in a school contest, it paves the way for a miracle of sorts—her father’s broken soul is transformed.

The House without a Christmas Tree, a new opera by Ricky Ian Gordon and Royce Vavrek that premiered at Houston Grand Opera in 2017, is based on the book by Gail Rock and the beloved 1972 television movie of the same name.

This album will be released as 1 Audio -CD and in digital formats for streaming and downloads. (Article number: PTC 5186697)

This album presents extraordinary works of three twentieth-century composers with diverse cultural backgrounds, underlining the versatility and legacy of the Orchestre de la Suisse Romande in its centenary year. Richard Strauss’ Schlagobers (Whipped Cream, 1924) is a playful ballet set in a Viennese Konditorei, of which the orchestral suite is featured on this album. With its lively mix of Viennese waltzes and modern harmonies, light-versed tunes interspersed by sudden outbreaks of ravishing beauty, all brilliantly orchestrated, it can be considered a further exploration of the composer’s “Rosenkavalier style”. Claude Debussy is featured with Jeux, Poème dansé (1912), another piece created for a ballet performance, built around an erotic nocturnal search for a lost tennis ball that Pierre Boulez characterized as a “Prélude à-l’Après-midi d’une Faune in sports clothes”. Debussy’s Jeux has been a major source of inspiration for post-war avantgarde composers such as Boulez and Stockhausen, and, therefore, the transition from Jeux to Györgi Ligeti’s Melodien, für Orchester (1971) is not jarring. Melodien has the unmistakable mix of sensuous yet eerie soundscapes that makes most of Ligeti’s works so filmic and appealing.

This album adds a significant chapter to the PENTATONE discography of the Orchestre de la Suisse Romande, which already contains the complete Bruckner Symphonies with Marek Janowski, three dance-oriented albums with Kazuki Yamada, and concerto recordings with renowned soloists such as Arabella Steinbacher, Johannes Moser and Denis Kozhukhin. On this album, the OSR’s new chief conductor Jonathan Nott makes his PENTATONE debut.

This album will be released as 1 Audio -CD and in digital formats for streaming and downloads. (Article number: PTC 5186721) 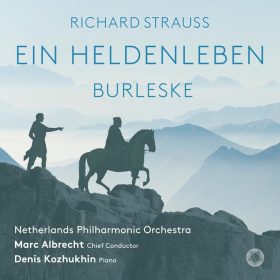 Richard Strauss – Burleske/Ein Heldenleben
Buy now
We would like to use our own and third party cookies and similar technologies for statistics and marketing purposes. You can set your preferences by selecting the options below. Withdraw your consent at any time via the shield icon.
Cookie SettingsAccept All
Manage consent