Stravinsky’s Perséphone (1934) is a dynamic musical-theatrical narration of the myth of Persephone’s abduction to the underworld and return to earth. The transparent, sober but evocative music epitomizes Stravinsky’s sensuous take on Neoclassicism, and the piece showcases Stravinsky’s eclectic, original and highly personal approach to music and musical drama through a playful mixture of several genres – melodrama, song, chorus, dance and pantomime. Ultimately, Perséphone offers Stravinsky’s second ode to spring, albeit without the brutal excesses of Le Sacre. This album was recorded live during the Helsinki Festival 2017 with a star cast featuring English tenor Andrew Staples and French actress Pauline Cheviller. They join forces with the Finnish National Opera’s chorus, children’s chorus, and orchestra, conducted by Esa-Pekka Salonen, in a breathtaking performance that emphasizes the piece’s transformative power.

This album will be released as 1 Super Audio -CD and in digital formats for streaming and high-resolution downloads. (Article number: PTC 5186585) 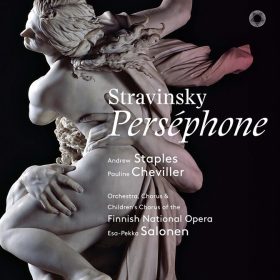 “(…) beautifully modelated performance (…)” The Guardian praises our release of “Stravinsky...