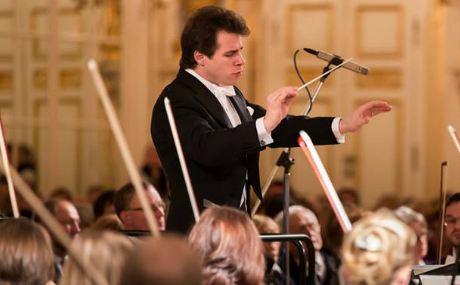 PENTATONE latest release of Dvořák: Overtures with PKF – Prague Philharmonia , conducted by Jakub Hrůša received a glowing review from HRAudio.net! This album reveals some of the more hidden treasures of Dvořák’s repertoire, namely his overtures, of which he wrote no less than thirteen. These overtures constitute gems of special brilliance in the treasury of Dvořák’s compositional bequest.

The distinctive contribution from Jakub Hrůša and the PKF Prague Philharmonia to Johannes Moser’s recent account of the Dvorak and Lalo Cello concertos for PENTATONE Dvořák & Lalo: Cello Concertos – Johannes Moser, Jakub Hrůša made a most favourable impression. On this beautifully recorded SACD the orchestra is given the opportunity to show its mettle in a most welcome collection of five Dvorak Overtures again directed by the charismatic Jakub Hrůša. These splendid works often appear as fill-ups to recordings of Dvorak Symphonies so it is good to hear them presented together rather than as mere adjuncts to longer pieces.

The programme opens with the cycle of three concert overtures that Dvorak composed under the collective title of ‘Nature, Life and Love’. These first appeared in 1891 but later they were separated by the composer and assigned the titles by which they are best known today – ‘In Nature’s Realm’, ‘Carnival’ and ‘Othello’ – and given individual opus numbers (Op.91, 92 and 93). All three overtures are linked thematically by the main theme of ‘In Nature’s Realm’ that is used in various guises in the other two. They are are full of Dvorak’s typical abundant melodic richness and charm as well as passages of drama and driving energy that often recall his popular Slavonic dances.

With their use of Czech folk songs and melodies, the two earlier overtures on this disc, ‘My Home’ Op. 62 and ‘Hussite’ Op. 67 , typify Dvorak’s lifelong patriotism.

‘My Home’ is the overture to the incidental music Dvorak composed to accompany the play’ Josef Kajetán Tyl’ by Frantisek Ferdinand Šamberk that depicts the life of the dramatist of the play’s title. Dvorak’s work incorporates the melody of a popular song ‘Where is my home?’ written by the composer Frantisek Skroup and a text by Tyl that quickly became very popular among Czechs and was accepted as their unofficial national anthem at a time when they were seeking to establish their own identity within the confines of Austro-Hungarian Empire. It is a most attractive piece and orchestrated with the composer’ s usual mastery.

The stirring ‘Hussite’ Overture of 1883 that completes this collection concerns the Czech religious reformer Jan Hus who was burned at the stake as a heretic in 1415. In this work Dvorak marvellously combines the battle hymn of the Hussite warriors ‘ Ye Warriors of God’ – familiar from the two final sections of Smetana’s ‘Ma Vlast’ – and the ‘St. Wenceslas Chorale’ , to build a thrilling composition that moves from a sombre opening chorale through the sounds of battle to reach a magnificent peroration that symbolises the reconciliation of the warring factions.

Read the complete review on HRAudio.net 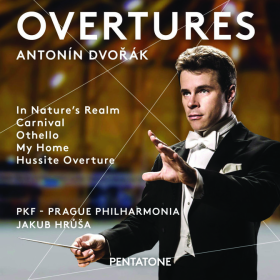